Why we do what we do – Alice at the tailoring shop

Alice is a 16 year old child who lives in Western Kenya. Young and orphaned is hard enough – having to scrape together a living while trying to stay safe from predators who know you are alone. Thankfully, Alice had a sponsor from another organization who was paying for some school fees and needs, which was helping her Immensely.  One day, as Alice was making her way home, she was raped by a taxi driver and the rape resulted in pregnancy. When the sponsor found out about the pregnancy, they immediately dropped their financial support, leaving the girl in an even more desperate situation. Raped, pregnant, orphaned, and now with no schooling, Alice, at 16 years old, was at the end of her rope.

Alice moved in with her grandmother but with no income, the situation quickly became worse, with no money for medical checkups or for good food.

Even though her health started to deteriorate, Alice gave birth to a healthy baby. 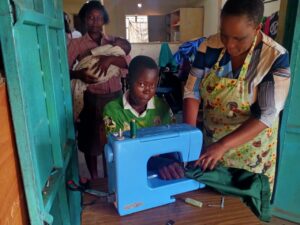 While staying with her grandmother, she saw the Tailoring Shop and asked for a chance for training. How to say no to her? When Frank, the project manager, heard her story and did a follow up to determine if she was saying the truth, he decided to offer a helping hand in allowing her to attend the training.

Guess who learned how to sew and now is sewing school uniforms? Yes, indeed! To sew school uniforms is to have consistent work because every school child needs a uniform! Alice is gaining many skills that she needs to fully be absorbed to start working in our shop. With a steady income and a hope that her life has worth and value, Alice has a future for herself and for her baby.  And THIS is why we do what we do! 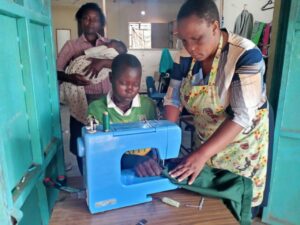