Taking in the Sounds

Previous Next
Taking in the Sounds 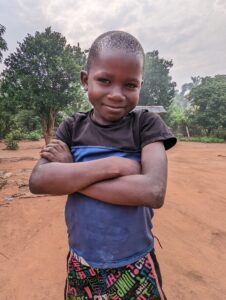 As the sun sets over the Tandala guesthouse, the night comes alive. First, a chirp, a gurgle, a moan. A rooster with his timing all askew joins in the chorus on occasion, letting those of us who hear him know he might not own a timepiece, but he has a loud, beautiful voice.

By midnight, the croaking of tens and tens of frogs are heard over the blowing wind which rustles the palm trees outside my window. The night is not hot, yet not cool, either. It is perfect as I lay under my mosquito net, taking in the sounds. What sounds like a very loud duck is not an animal I know, but imagine it it a large frog of some type. Is it edible, I wonder? The occasional insect crashes against the metal window screen, surely causing itself harm before flying off.

At 4:00am, I hear the sweeping of the dirt yard…scratch, scratch, scratch of Africa’s short reed broom against the packed dirt, ridding it of fallen leaves. And now, at 4:30, the greatest sound of all…the true welcoming of the day as animals get quieter, although never altogether silent: the voices singing praises in the early morning from houses far away. A single male voice starts the hymn-sing and it is joined by a couple others, each singing from that particular corner of the village. As they near the end of their first song, my ears pick up a second group singing further away. If you sit still, really still on the broken rocking chair on the veranda, you soon feel yourself surrounded by such beauty and color, even in the darkness and it will make the hair on your nape stand on end. 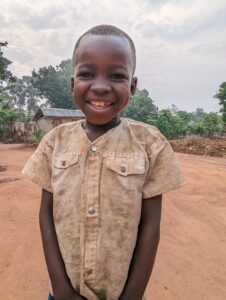 Other sounds come to focus: the snoring from the room next to mine, drumming from various directions, and the sound of the AFCA boys trying to be ready on time. They don’t manage that feat, so I enjoy the ongoing songs, croaks, beeps, plops, and buzzing that surround me as the sky goes from black to pewter grey.