Gazing at the stars of the Southern Hemisphere

Previous Next
Gazing at the stars of the Southern Hemisphere 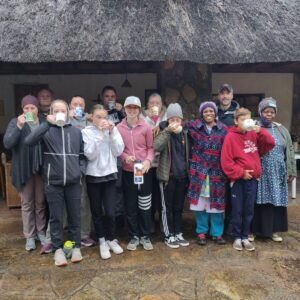 The team arrives at the Bulawayo airport looking more chipper than I thought they’d look, thanks to a hotel stay in Johannesburg. It is so great to hug people I have been corresponding with for such a long time! The sky is so, so blue and the temperature is a perfect 74 degrees or so. We pile into the hired van and take off on a 2.5 hour bumpy road to Morning Star, our home for the first five nights of this trip. The Weaverettes and I have been at MS for the past four days and have been getting to know Di and Gary, the new folks who run the place. They are such a gracious couple, welcoming us warmly and making us feel right at home again, in the place that has been home to my children since they were 3 and 7 years old. The kids were unsure if Uncle Gary and Aunt Di would measure up to Grandpa Chris and Grandma Norma, the folks who we have worked with for many years and who had to move to South Africa in order to get Chris out of the dusty winters here which hurt his lungs.

In no time, Gary and Aiden are as thick as thieves, fixing a motor, making rat traps, shooting paint ball guns at each other, and exchanging secret laughs. Juju is quieter…making her way around the camp she knows so well, noticing changes made, all the while keeping an eye on Gary and Di. When I hear her making salad with Di, exchanging stories, I know things will be ok. Now, with the team arriving, Juju, Aiden and Gary are busy getting things ready at MS while I bring the team with me from the airport and Di purchases veggies in town.

We bump on and on down Old Gwanda Road until we reach the Matobo Primary School where Gary meets us in the red truck. With the luggage secured in the open back, kids and some adults hanging off the sides and back, we make our way to Morning Star.

We unload. We share a meal. We become friends.

Just like that, the team is cohesive, with James making us laugh so hard we hear snorts coming out of Gary. We divide into smaller groups and dive into work that will help others…beehives are decorated to attract swarms (these will be given to beneficiary families, with #AFCAids agreeing to fund this three year, 150-hive project), the building of a super sturdy chicken coop is started (not as easy as it sound…first, trees had to be cut, sand dug from the riverbed, clay taken from anthills, holes dug, rock transported, 250 cement blocks had to be unloaded, etc), 110 bales of thatch hay are moved and stored for other projects, and the outdoor kitchen is painted.

The evenings find us yawning at 6:30pm, checking the clock until it turns to 8:00pm, the time we’ve said we will go to sleep. Until then, dinner and hilarious conversations keep us going as we sit around the fire pit, gazing at the stars of the southern hemisphere while sipping homemade kombucha.

When the weather dips and the sky turns white in day four, we emerge from our huts wearing winter jackets, freezing. We look forward to blue skies again, but until then, we continue our work, learning from each other and from this great country.