Bopping to music on way to airport

Previous Next
Bopping to music on way to airport 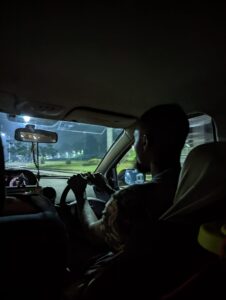 Trois Cents calls early, telling us he is in his way and requests directions to the guesthouse. At 9am, he calls again, saying he is leaving his home and it expect him soon. At 12, we are still waiting and he calls to reconfirm the address and directions. At 2, I have given up seeing him and am wondering out loud what the purpose of his visit is. At 4:30pm, he shows up, saying he is so happy he knows Kinshasa well, as it was easy to find the house. WHAT?!?

Upon arrival, he informs us that he needs money for tickets and with our names written on a slip of paper, along with my return date to Kinshasa, he bids us goodbye and says to expect a call. We have been told three times, by three different people, that there are no spaces available on the Saturday flight and even the cargo plane is full. Flying with cargo was out Plan B and those plans were also dashed, as other desperate people already secured the few spots sitting on the luggage and boxes headed to Gemena. Our next plan is to fly on Tuesday and the unflappable Trois Cents heads off to figure out which plan is actually possible, promising to deliver something.

I decide to go on a little walk while we wait to hear news and find myself trying to cross a road full of cars, motorcycles and people, with no where else to go but I to the traffic due to a large (LARGE) roll of spiky, razor sharp barbed wire laying smack dab in the middle of my tiny edge of the road. I, silly girl that I am, look right and left to cross, when a man grabs my hand and says, “cone”. I am dragged across the traffic, deposited on the other side unharmed but taken aback by his kindness, forwardness, and the pounding heart I feel through my t-shirt.

Deciding a ten minute walk is more than enough exercise for today, I arrive at the guesthouse earlier than planned, but safe and sound. Another hour passes and Mandaba’s phone delivers the most unexpected news: we have spots on the Saturday flight and must pay $20 in thanks to some woman who will meet us at the airport right before we leave. I try not to think of the people who were surely bumped from the flight as a hurried series of texts and WhatsApp messages follow, undoing all the communications from earlier: letting the guesthouse owner know that we don’t need to stay longer, after all; confirming with Matthieu and Guy at the Gemena office that we will arrive as planned; Eric and Bebe, letting them know the new (well…old, but new again) news, and a taxi driver to pick us up at 4:30wm so we have enough time to do security and covid tests before flying.

Now, the man in my contacts known as Dode Taxi is bopping to music as we make our way to the airport in the morning darkness. Traffic is super light at this time and we are making incredible time as we pass people waiting on the sides of the road for transportation going somewhere, smoke thick around them from tens and tens of bonfires burning brightly against the dark.

Seems we get to leave the flying on the freight plane for another day.